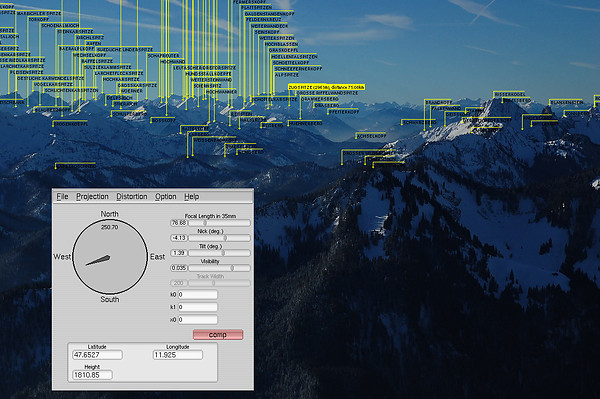 The screenshot shows the view from Lempersberg to Zugspitze in the Bavarian alps. The GPS data comes from Jonathan de Ferranti's great website http://www.viewfinderpanoramas.org/.

gipfel helps to find the names of mountains or points of interest on a picture.
It uses a database containing names and GPS data. With the given viewpoint (the point from which the picture was taken) and two known mountains on the picture, gipfel can compute all parameters needed to compute the positions of other mountains on the picture.
gipfel can also be used to play around with the parameters manually. But it's pretty difficult to find the right parameters for a given picture manually.
You can think of gipfel as a georeferencing software for arbitrary images (not only satellite images or maps).
gipfel also has an image stitching mode, which allows to generate panorama images from multiple images that have been referenced with gipfel. The nice thing about the new image stitching is that it reuses the code that already existed for referencing images.

Windows Binary:
Self contained package for Windows. Unzip and start gipfel.exe in the "Program Files" folder. Please report success and failures to help improving it.

A git repository can be found here.

Here is an (old) video (6MB) that demonstrates how gipfel works. Streaming does currently not work, so you may need to download the file first.

A picture by Carsten Clasohm (http://www.clasohm.com/) taken from Simmetsberg towards Benediktenwand is used.
First the current viewpoint is set. Then some peaks are marked by positioning the green flags. After that, the one known peak (Benediktenwand) is marked with a red flag. After that the "guess" button is
pushed and gipfel computes the positions of the other peaks. Now, a GPS-track from http://www.alpin-koordinaten.de is loaded. It shows a nice hike to Jochberg.
Finally the effect of the various view parameters is shown by modifying them manually.

The following images are stitched together with the gipfel stitching option.

was used to create correctly oriented tiff images.
These tiff images were then blended using enblend.

The following one is from Sentinel Dome (Yosemite) with USGS data: